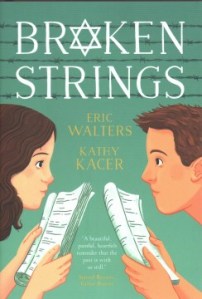 Lynn: Veteran authors Eric Walters and Kathy Kacer have joined forces in their new middle-grade novel, Broken Strings (Penguin/Puffin Canada, 2019) and the result is a complex, layered and very moving story that shouldn’t be missed.

There is a lot going in this book! Set in 2002 in the aftermath of the attack on the towers, Shirli Berman, a 7th grader, is disappointed to learn that she has been cast in the role of Goldi instead of Hodel in the musical Fiddler on the Roof. Shirli rallies though and goes looking for possible costumes and props in the attic of her grandfather’s house. There Shirli is shocked to discover an old violin and a poster showing her grandfather as a young boy with what looks like a family group all posed with instruments. Zayde had never allowed music in the house nor had he ever attended any of Shirli’s recitals or performances. When she takes her discoveries down to her grandfather, he is deeply shocked and then angry. Confused and hurt, Shirli goes back a few days later with her father and then for the first time, Zayde begins to talk about his family and his past.

Slowly over the course of the next few months, the family learns about their Polish family who were a traveling Klezmer band, moving from village to village. When the Nazis took over Poland, the family managed to stay unnoticed at first and then hid in the forest until they were eventually captured and sent to Auschwitz. Stubbornly carrying his violin during the capture and transport, Zayde was conscripted in a camp orchestra and forced to play as each new transport arrived and the Jewish prisoners were sorted with most sent to their deaths. Shirli’s Zayde was the only survivor from his family and after the war, he put music aside forever until Shirli’s discovery opened the door to the beginnings of healing.

The authors do an outstanding job of providing this history for young readers, connecting it to the history of the Sept. 11th attack and examining issues of prejudice, hatred, and oppression in a way that is never heavy-handed but thoughtful and relevant for today. Plot threads of the middle school musical production and a sweet first crush provide a bit of lightness and help keep the interest high. The role and power of music is also a theme that flows throughout the story and young musicians will find much here to think about.

This piece of Holocaust history was new to me too and with Fiddler on the Roof being a personal favorite, I too learned and was deeply moved by the story. An Author’s Note at the end provides additional historical information.

Lynn: Finding your voice is an important theme of teen books. In Stacey Lee’s new historical fiction, The Downstairs Girl (Penguin/Putnam, 2019), we meet a young girl for whom speaking at all literally means risking the roof over her head and the food on the table. Jo Kuan works as a maid to the cruel and selfish daughter of one of the wealthiest families in Atlanta. She goes home at night to a secret basement home under the offices of The Focus, an Atlanta newspaper. Originally a part of the Underground Railroad, the little apartment is unknown to the upstairs Bell family and Jo has grown up knowing she and her grandfather must not make a sound to reveal their presence. Living in earshot of the lively Bell family has given Jo a wonderful education and vocabulary to assist her already sharp, curious mind and growing sense of justice. But Jo is Chinese in the Atlanta of 1890 and the Chinese, many of whom were brought to the South during the Reconstruction to work the plantations, are discriminated against in both law and society. So even outside of their little home, Jo must keep her thoughts to herself.

But then Jo wangles a job as the new advice columnist for The Focus – anonymously. Not even the young editor, handsome Nathan Bell, knows the identity of the Dear Miss Sweetie column and the success of the new column skyrockets. Gradually Jo takes on discrimination, women’s rights, and injustice in Atlanta and her columns and comments are the talk of the town. As deeply buried secrets about Jo’s past surface and controversy swirls, Jo begins to wonder if the price of speaking up is way too high.

Lee has once more done a stellar job of weaving fascinating history into a lively and highly entertaining story. I knew nothing of the history of Chinese immigrants in the South and the story also includes a less-than-flattering picture of the embedded discrimination in the suffragette movement, as well as the social and legal restrictions on women and minorities that existed at the time. The book is packed with vivid and well-developed characters and Jo, in particular, won my heart from the very first page. As Jo truly finds her voice and speaks up for herself and others, readers will cheer.

Cindy: The “Agony Aunt” columns, as they were nicknamed at the time, were often written by male journalists pretending to be female authors but Jo’s identity is a dangerous secret, and there are plenty of other dangers that keep the plot moving along. Interspersed with the serious themes and events, are chapter-opening sample advice responses to Miss Sweeties fan mail, some tongue in cheek and others with a good dose of snark. This story gallops to a finish, perhaps a little too neatly, but all but the most cynical readers will be cheering as author and protagonist cross the finish line. I’d love to see this book brought to film. Definitely recommend this one to fans of Jennifer Donnelly’s novel, These Shallow Graves (Delacorte, 2015), another 19th-century story with a feisty heroine, a family mystery, and issues of social and gender injustice.

Lynn: One of the things I love most about the world of books—and children’s books in particular—is the way authors keep crafting new stories from the past that connect deeply to the events of the present. There is no better way for readers to learn about history and its driving forces and to realize that those same forces impact us still. Michael Morpurgo’s new book, The Day the World Stopped Turning, (Feiwel, 2019) is a shining example of that. There have been thousands of books written about WWII (and we have read a LOT of them) but Morpurgo tells a story that is fresh and unique and one that shines a beam on today’s issues in a way that will resonate with young readers.

Morpurgo uses an unusual structure for a book for middle schoolers. The framing story is that of Vincent Carter, an adult over 50, looking back briefly at his youth and then at his decision as an 18-year-old to leave home and travel to the south of France, following the path of the artist who inspires him, Vincent Van Gogh. He is further motivated by a childhood story about the wisdom of following the bend in the road to wherever it takes him. While walking in the isolated marshy area of the Camargue, Vincent falls seriously ill and collapses. He is rescued by an autistic man, Lorenzo, and taken back to a farm by the beach where Lorenzo and his companion Kezia nurse Vincent back to health. It is here that that heart of the story lies. As Vincent gradually regains his health, he becomes curious about his rescuers and their mysterious history. The narration then shifts to Kezia as she slowly relates their story that begins in 1932, of Lorenzo and his farmer parents and of Kezia only child of Roma parents who moved from town to town with their beautiful carousel. As Kezia grew older, her parents decided to stay in the town near the farm so she could go to school. The war is on, France has been defeated and the Vichy government rules the Camargue but for the most part, the war has left the area relatively untouched. All that ends one day when the Germans roll into town to set up fortifications on the beach and to stay. Lorenzo’s parents know that Roma people are being rounded up and they offer to hide Zezia and her family on the farm. This decision will forever change the lives of the two children, their families, and the town. And the story, as Kezia tells it, will forever change Vincent’s life as well.

This is a quiet tale and although there are great tension and suspense, the story allows time for readers to absorb and to reflect. It is a story about the issues of racism and hatred, of war and fear. But it is also an uplifting story of the greater power of friendship, kindness and love, courage, and the enduring nature of doing what is right. The setting will be unfamiliar to most American students but the lyrical writing brings this remote and beautiful place to life. The narratives are an interesting blend of adult and child perspectives with the framing voice adult and the WWII sections of the book in young Kezia’s voice. This device brings added emphasis to the central story and puts readers firmly in the shoes of the children experiencing the events of the occupation.  The parallels to issues in the headlines today are stark and kids will readily make the comparisons and come to their own conclusions.

This book is not for every kid but it offers rich rewards for a mature and curious reader ready to try something different.