Lynn and Cindy: One of the things we love about picture books is that authors and illustrators often take up the challenge of bringing a little known story to young readers. It is so important to keep our history and our stories alive! As reviewers, we also love that we get the benefit of these stories too. Here are two new picture books that do this important work—and do it wonderfully.

Lynn: Decades before Rosa Park refused to sit in the back of a bus, another brave determined woman demanded her rights on a streetcar in New York. Beth Anderson tells her inspiring story in Lizzie Demands a Seat: Elizabeth Jennings Fights for Streetcar Rights (Boyds Mills/Calkins Creek, 2020). It was 1854 in New York City and Elizabeth Jenkins, a teacher and organist from a wealthy family, was on her way to church. When the horse-drawn streetcar arrived it had empty seats and Lizzie and her friend hurried to board. But the conductor would not allow them on, telling them to wait for the car for “her people.” Lizzie had no intention of waiting. There was no law keeping anyone of color from riding the streetcars although there was a custom of not riding if a white passenger objected. When no one on board objected, Lizzie persisted and the conductor physically threw them from the car. Lizzie, whose family were leaders in their community and well connected, took the Third Avenue Streetcar company to court where, with her attorney Chester A. Arthur, she won her case, paving the way for people of color to fight for their rights to ride then and in the future.

The text is wonderful, lively, and compelling and I’m truly sorry it has taken me so long to learn about Elizabeth Jennings. The author notes that the “dialogue closely follows her account as it appeared in the newspapers of the time,” and this gives the story a very immediate and personal feel that will appeal to kids. The back matter is outstanding too with fascinating additional historical material on Elizabeth Jennings and her case in an Author’s Note, information on the research. a bibliography, a list of further readings, and a Note from the Illustrator.

And speaking of illustrators! I am a big admirer of E.B. Lewis’s illustrations and here they add wonderfully to the overall impact of the story. Lewis, who usually uses a muted palette, chose intense colors and the result is a wonderful sense of the drama of the event. In an artist’s note, Lewis says, “I wanted to go all out in the way of color—to stretch my own internal prism.” He even had to purchase colors he had never used before. I’m so glad he did as the result is beautiful and effective!

Once again a picture book has introduced me to a memorable and important historical person that I had never heard of before. I’m beginning to think that we should give up textbooks and flood our classrooms with shelves of outstanding nonfiction picture books! 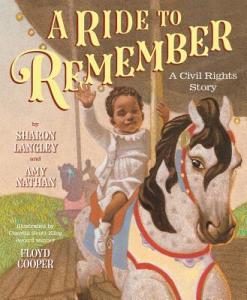 Cindy: Another African American girl who took an important seat is featured in A Ride to Remember (Abrams, 2020) by Sharon Langley and Amy Nathan. Occasional peaceful protests at the Gwynn Oak Amusement Park in Baltimore, Maryland were held for a decade asking for the right for people of color to visit the park. Nothing changed. But after new segregation laws were passed in Baltimore in 1962, a big protest was planned at the park for Independence Day, July 4, 1963. Arrests were made but the protest continued a few days later. When pressure mounted as the publicity surrounding the protests spread, change finally occurred and the park officials corrected their policy. On August 28, 1963, the park was opened to everyone. Sharon Langley’s parents bought tickets and they were the first family of color to walk through the gates. Sharon was photographed riding a horse on the carousel, a photo that ended up in the newspapers the next day. The carousel is now turning its circles on the National Mall in Washington, D.C. and Sharon Langley’s name is on a horse’s saddle and horseshoe.

Co-author Amy Nathan wrote a book for teens and adults Round and Round Together: Taking a Merry-Go-Round Ride into the Civil Rights Movement that also includes the other historic event of 8-28-63, Martin Luther King, Jr.’s “I Have a Dream” speech at the March on Washington. Award-winning illustrator Floyd Cooper’ artwork helps tell this important story in moving paintings.