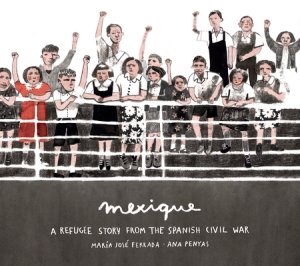 Cindy: When my middle school students and I read Alan Gratz’s novel, Refugee (Scholastic, 2017)  we were introduced to the St. Louis, a ship of 900 Jewish refugees headed to Cuba in 1939. They did not know that story, and I did not know that another ship, the Mexique, left France two years earlier carrying 456 children, without their parents, for what was hoped to be a temporary exile from the dangers of the Spanish Civil War. Mexique: A Refugee Story From the Spanish Civil War (Eerdmans, 2020) by María José Ferrada is one of the most moving picture books I’ve read and it is a story for adults and teens as well as children. The “Children of Morelia” were bound for Mexico, for what they were told would be the length of a summer holiday, but history would tell another story. Older children on the ship comforted the younger ones during the long, scary voyage, while others played “war” on the ship’s deck. Their holiday would be anything but, and most of them would never see their parents or their country again. Spain, under Francisco Franco’s rule for the next four decades, remained dangerous for those people associated with the Spanish Republic he had defeated. Ferrada’s writing is poetic, and the illustrations haunting, based as they are on historical photographs from the Mexique. Reading this book the week that we learned that the parents of 545 children cannot be located after being separated by our government, is heartbreaking. Mexico took in these Spanish child refugees 83 years ago and when it was not safe to return them to their parents, they gave them homes and kept them safe. We are housing Mexico’s children (and children from other Latin and South American countries) in dog kennels in 2020. This story should be required reading for the adults “leading” our country today.

Lynn: Like Cindy, I was unaware of this chapter in history and grateful once again for the power of picture books. For her illustrations here, Ana Penyas worked from period photographs using a dark palette with an occasional and dramatic highlight of red. The result is a grim and foreboding mood foretelling the children’s future without their families. One of the most jarring two-page spreads juxtaposes scenes of the war in Spain and the children “playing war” on board the ship. That one is haunting my dreams and will for days to come.

Ferrada includes an Afterword which provides information about the fates of the young passengers destined to remain in Mexico far longer than anyone had imagined. This powerful book would be an excellent choice to use in a secondary classroom studying this period in history.