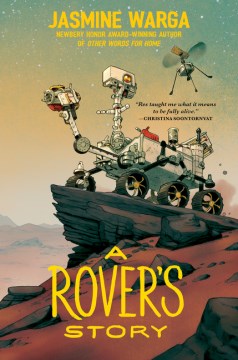 What does it mean to be human? Does it mean the ability to wonder, to hope or to be scared? Does it mean recognizing that you have emotions? Jasmine Warga’s newest book explores that important question and she does it in a way that is intriguing, unusual, and compelling. A Rover’s Story (Scholastic, Oct. 2022) began when Warga’s young daughter asked her to turn on the TV to watch the Mars Rover Launch in November 2022. After watching in fascination together, one of her daughters asked Warga, “Mama, do you think the robot is scared?” And a book was born.

Resilience is a robot intended to travel to Mars, take samples and photographs, send home information, and locate another rover that has gone silent. Readers meet Resilience in a NASA lab where workers, especially scientists Raina and Xander, work long into the night to prepare the little robot for its mission. Short chapters alternate at the beginning between Resilience as something happens to create awareness, Sophie (Raina’s daughter), and Journey, another rover in production. Warga skillfully develops all these fascinating characters, both Homosapien and robot as all of them experience the various emotions that make us all who we are.

Spanning over 17 years, the story follows Resilience and his eventual teammates, Fly, his chatty enthusiastic drone, Guardian, a satellite, and the various humans remaining behind. Adventures, catastrophes, loneliness, hope, courage, and, yes, fear, all play a fascinating part in the explorations, both physical and emotional, in this story. I started the book a bit wary of anthropomorphizing the robot but I blew past that at light-year speed. I fell head-over-wheels in love with all these characters and will think about Resilience for a long long time. This would be a great choice for a classroom read-aloud.

Cindy: “Zappedty, zip,” I don’t blame Warga for getting sucked into the lives of the Mars rovers. I was hooked after reading The Mighty Mars Rovers: The Incredible Adventures of Spirit and Opportunity (Clarion, 2012) by Elizabeth Rusch. Even though it was nonfiction, the rovers came alive in her writing and had me rooting for them as if they were human. The blurb on the advanced reader copy of A Rover’s Story describes it as The One and Only Ivan meets The Wild Robot. Having read and loved both of those stories for a similar age level, I would agree. There is much to be learned about what it means to be human in children’s books, and not just from the human characters. The teamwork between the scientists is equaled by that between Resilience, Fly, and Guardian. Sophie has her own worries, at first jealous of the time her mother gives to the rover, then concerned for the project once she meets Resilience and watches the launch, and then problems that aren’t so easily fixable as reprogramming a robot. This is a story that is sure to prompt some discussion amongst tweens, and it really would be a great read-aloud as Lynn suggests.